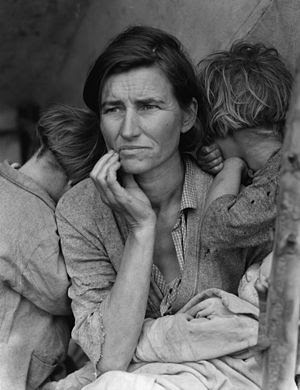 Lange's life was not without pain and suffering. As a child she contracted polio at the age of seven and she had limp in her right side her whole life. She also grew up in a family whose father abandoned them when she 12. Both experiences formed who she was to become.
Lange studied photography in New York City classes taught by Clarence H. White and she apprenticed with other studios including the famous Arnold Genthe. A move in 1918to San Francisco, there she opened a portrait studio and married artist Maynard Dixon, the marriage did not last but they did have two sons.
But, when the Great Depression hit, Lange hit the streets, turning her camera to real life instead a posed life. Her photographs of people who were unemployed and homeless caught the attention of the Farm Security Administration FSA. It is also at this time she met and married her second husband, Paul Schuster Taylor a Professor of Economics at the University of California, Berkeley. Together they documented rural poverty and exploitation of sharecroppers and migrant workers.
1935 to 1939, Lange's work captured the plight of the poor and forgotten sharecroppers, farm families and migrant workers. For free, Lange and Taylor distributed their stories and photographs to newspapers throughout the country. Educating a Nation to the pain and suffering of the section of Americans.
Posted by beingwoman at 3:54 PM No comments: Links to this post

Born this day in 1680,Elizabeth Haddon Estaugh, founder of Haddonfield, New Jersey.
Born in England to a wealthy Quaker family. To be free of religious persecution, Haddon's father bought 500 acres of property in the New World. Due to illness he was unable to claim his land. Instead of loosing the land he sent his daughter Elizabeth to take his place. So in 1701, at the of age 21, Elizabeth set sail for the New World. Landing in Philadelphia she made her way to her father's land which she named in his honor, Haddonfield.
Elizabeth relationship with the local Unalachtico Lenape tribe was one of respect and she welcomed the opportunity of learning their ways and customs. Especially when it came to learning how to use native plants for medical use. Which Elizabeth described as sophisticated used a board range of plants. And one must understand that when Elizabeth first landed in the New World it was a wilderness. People were living in caves along the river.
Another piece of business Elizabeth took care was marriage. After meeting John Estaugh, a Quaker minister, Elizabeth made a marriage proposal which he accepted and they were married in 1702. And their courtship inspired Henry Wadsworth Longfellow poem, Elizabeth, from the collection Tales of a Wayside Inn

In 1713, Elizabeth and John built a three story brick mansion, called New Haddonfield Plantation Behind their home Elizabeth built The Brew House, this is where Elizabeth dried herbs and made salve for healing. Both John and Elizabeth held the position helping the sick. This information the Native Unalachtico Tribe taught her went to good use.

In 1721, Elizabeth's father gifted an acre of land to the building of the Friend Quaker Meetinghouse and burial ground. This assured a growing community. Elizabeth was also the Women's Quaker clerk for fifty years.
For fifty years Elizabeth was doctor, clerk and a woman who took her position as founder of a township as one of yes nurturer, but so much more as it seems she held out her hand to all peoples living Native and immigrant like herself.

One of Elizabeth's deepest concerns was that of the relationship with the Unalachtico Tribe, whom were forced to leave their homeland. But, not by the Quaker Friends.
Posted by beingwoman at 1:06 PM No comments: Links to this post 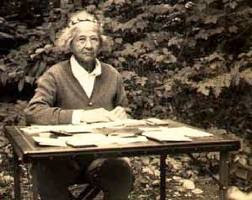 Born this day in 1870, Ynes Mexia, botanist. Mexia was an Mexican-American who spent the first part of her career as a social work and then in 1921, Mexia enrolled in botany classes at University of California in Berkeley. She was 51 years old. By the age of 55, Mexia began the work of collecting plants throughout North and South Americas. Mexia's research took her deepest, isolated parts of South America. One of these trips lead to a very dangerous event. Massive flooding trapped her research party in deep jungle with no safe way to get out. After waiting three weeks and with starvation setting in- Mexia organized the building of a raft to ride down the river toward civilization. They were successful in finding their out and safely.
Mexia collected over 150,000 species. She is credited with discovering between two to five hundred new species.

Her specimen collections can be viewed at the Academy. Portions are duplicated at the Academy of Natural Sciences, Philadelphia; Catholic University, Washington, D.C.; the Field Museum of Natural History, Chicago; Gray Herbarium, Harvard University; the University of California, Berkeley; and important museums and botanical gardens in London, Copenhagen, Geneva, Paris, Stockholm, and Zurich. Her personal papers are at the Academy and at the Bancroft Library at UC Berkeley.