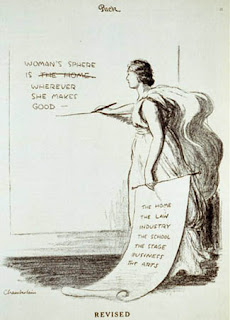 Anne McDowell was born this day in 1826. She was journalist and publisher for the
"Woman's Advocate", 1855-1860. True to her name, "Woman's Advocate" hired only women and only women stockholders too. There were many magazines and newspapers in the 19th century dedicated to the women's suffrage movement. The first daily newspaper in the world was produced by a woman, Elizabeth Malet. "The Daily Courant" was published in London, England March 1702.

Also on this day in 1993; Lorena Bobbitt cut off her husband's penis with a kitchen knife as he slept. She claimed self-defense. Before falling asleep, John had beaten and then raped his wife. see 1-10-09 for details of this story.