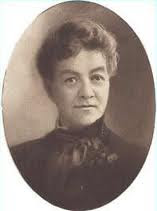 Jane Cunningham Croly was born this day in 1829. Croly was a professional jounalist and was the first woman to have a sydicated column. Pen name, Jennie June. She was also made an editor at "New York World" in 1862. In 1868, Charles Dickens was speaking at the New York Press Club and women were banned from attending! So, Croly organized and founded, "Sorosis". The first women's club. And in 1889, "The New York Women's Press Club". Inducted into the National Women's Hall of Fame in 1994.

Minnie Maddern Fiske or Mrs. Fiske (stage name) was born this day in 1865. Considered the most important American Actress of first part of the 20th century. Mrs. Fiske starred in Henrik Ibsen's plays; in 1903 "A Doll's House" and in 1904 "Hedda Gabber". Oh and she thought film did not suit her talents.
Posted by beingwoman at 12:12 PM