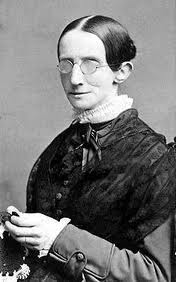 Born this day in 1829, Laura Bridgman. The first American blind-deaf person to be truly educated. Laura Bridgeman taught Annie Sullivan the "Manual Alphabet", which in turn taught Helen Keller. Bridgman suffered an illness that left her blind and deaf at two. At home she was treated kindly and learned to sew and knit. And there was a kindly family friend- a bachelor, Mr. Asa Tenney who took an interest in Laura.
At age 8 Laura began a formal education at "Perkins School for the Blind." Dr. Howe developed an approach to communicating with his student. By using objects and pasting raised words to them, and then as Laura learned make the connections; Dr. Howe added the single letters- the alphabet and then numbers. And Howe pointed out "...human intelligence only requires stimulation." Luara is described as good natured but easily upset. Laura's story spread throughout the world. Charles Dickens visited the school in 1842. And writes about her in his journal. Laura began keeping a journal in 1842. And in 1867, a series of writings she called poems. "Holy Home", is the title of one of the popular poems. Living her life at the school, Laura taught and inspired her fellow human beings. She lived 50 years before Helen Keller and Helen's mother read about Laura and contacted the school. The rest is her-story.
Posted by beingwoman at 10:29 AM