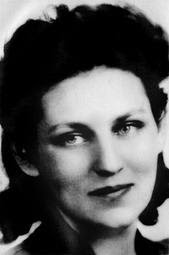 Born this day in 1912, Tillie Lerner Olsen. Olsen is credited with being among the first generation of feminist writers. In her youth, Olsen dropped out of high school and held many working class jobs: waitress, domestic worker and meat trimmer. She was once jailed for trying to unionize the packing house workers and charged with "making a loud and unusual noise." She began to write at nineteen, capturing the harsh realities of her life. The first chapter of her first novel was published in The Partisan Review in 1934 and, from this, Olsen received a contract with Random House. She was unable to complete the novel because she needed to care for her family. In 1961, she was finally published. The volume included four short stories about working class women: "I Stand Here Ironing","O, Yes", and "Hey Sailor, What Ship?" and the fourth, also the title of the book, was "Tell Me A Riddle." She was awarded the O. Henry Award that year for "best short story." In 1974 the novel she began in 1934 was completed and published under the title, Yonnondio: From the Thirties.
Olsen wrote a non-fiction volume, Silences--a study of the silent times in a writer's life (be it writer's block, the struggle of the working-class writer (especially women) or simply finding the time to fulfill themselves artistically.) Olsen points out that all of the females that had been successful up to this time were either single or they had a nanny to care for their children. But, in those times of silence, the study of daily reality forms in an artist's heart and mind, filling each page, shattering the silence.
To read the full text of "I Stand Here Ironing," click this link: http://members.multimania.co.uk/shortstories/olsenironing.html
On this day in 1697, in Massachusetts, the Colony officially regretted the Salem Witch Hunt, and made an offering by fasting for the day.

Also on this day in 1976, "The Bionic Woman" portrayed by Lindsay Wagner, premiered on ABC television station.
Posted by beingwoman at 7:25 PM