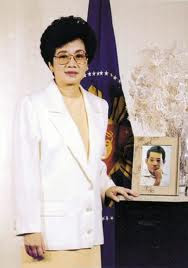 Born this day in 1933, Maria Corazon Aquino, one of the most remarkable women of the 20th century. Time magazine called her Woman of The Year in 1986. Her story as a world leader begins with a tragedy. Married to Senator Benigno Aquino, Jr., who was a very strong critic of President Ferdinand Marcos, a dictator ruling over the Philippines. Senator Aquino returned from a three year exile in the United States and was assassinated in 1983.
An unlikely leader, Aquino stepped into the place of her husband. Becoming a leader against the Marcos regime. Marco tried to steal the election by calling Marshall law and declaring himself the winner. Aquino stood up and demanded justice and lead her country People Power Revolution in 1986. It brought the Marcos regime down and Aquino restored democracy to her country. It was not an easy road to follow but she did with compassion, intelligence and courage.

This is for the romantics. On this day in 1858 Princess Victoria (daughter of Queen Victoria) married the crown Prince of Prussia and as the Princess walked down the aisle, Mendelssohn's played the "Wedding March" for the first time. And a tradition was born.

On this day in 1851, Sojourner Truth addresses, the 1st Black Women's Rights Convention.
Posted by beingwoman at 12:17 PM