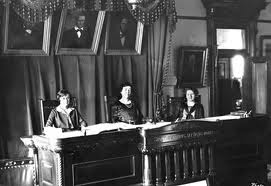 On this day in 1925, Governor Pat Neff of Texas, appointed three women to the US State Supreme Court of Texas. Attorneys Hattie Henenberg, Hortense Ward, and Ruth Brazzil. They were appointed to hear the appeal case involving, The Woodmen of the World, "WOW"- a fraternal association whose membership included all the male lawyers and judges of Texas. This all female Supreme Court adjourned after they reached their decision in May of 1925. After this event in Texas- they elected their the first woman to the House of Representatives!

Born this day in 1867, Emily Greene Balch. An academic, writer and pacifist. Balch received the Nobel Peace Prize in 1946, for her work with "Women's International League for Peace and Freedom."
Posted by beingwoman at 8:17 PM