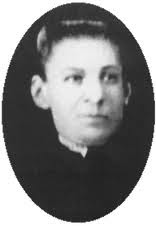 Born this day in 1843, Frances Wisebart Jacobs, "Mother of Charities", Jewsih Pioneer of Colorado. The move West was for her husband's work. And soon after settling in Colorado, Jacobs went to work for the poor and sick. TB victims would travel to Colorado because of the dry and clean mountain air was helpful for their recovery. But, there were no hospitals or spas for healing. The streets and jails were full with sick people.
Jacobs founded Hebrew Ladies Relief Society. But,it was clear,that the need went outside the Jewish community. Jacobs,widen her scope by collaborating with other religious organizations. Jacobs was a compelling speaker and had a talent for bringing people together to work for a common good. Together they founded a free kindergarden for the poor's children. And as the number of sick continued to increase, it was clear that a hospital was greatly needed. Sadly, Jacobs did not live to see the hospital opened. Frances did not shy away from the very hard work of caring for the sick. Warned to take it easy and rest. Jacobs couldn't and she became very ill and died in 1892. And because of her compassion and tireless work and inspiring others. the hospital was named in her honor and opened in 1900, The Frances Jacobs Hospital.
In the Colorado's State Capital Building there are sixteen stained glass images of people who were important to the pioneering spirit of creating the state Colorado, there is one woman, and yes it is Frances Jacobs.
Posted by beingwoman at 10:21 PM