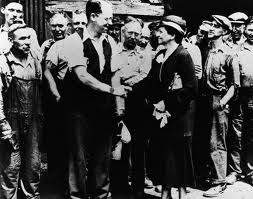 Born this day in 1882, Frances Perkins, U.S. Secretary of Labor from 1933 to 1945. She became the first woman to enter the presidential line of succession.
Perkins was an eye witness to the Triangle Fire of 1911, as the trapped girls (yes most of the people died in the fire were little girls age 11-15) Locked in by their boss 149 girls died, many to avoid the fire clasping their hands and leaping to their death.
Perkins never forgot this tragic and senseless death, it was "seared on my heart."
Roosevelt signed in the New Deal and Perkins was of the ready; supporting the Civilian Conservation Corps, Public Works Administration and the National Industrial Recovery Act. And The Social Security Act, Perkins set up unemployment benefits, pensions for the uncovered elderly Americans, and welfare for the poorest Americans.
Perkins established laws to reduce workplace accidents and set up laws against child labor. Fair Labor Standards Act which set up the minimum wage and overtime laws for American workers and she also defined the 40 hour work week.

"Perkins formed governmental policy for working with labor unions and helped to alleviate strikes by way of the United States Conciliation Service, Perkins resisted having American women be drafted to serve the military in World War II so that they could enter the civilian workforce in greatly expanded numbers."

Perkins supported the rights of the worker and their right to unionize. A famous snapshot of Perkins strength and heart, as she marched down to the Post Office in Homestead, with thousands of steel workers training behind her. They were denied a meeting place by the mayor and the steel executives...Perkins found another location and met with the workers and informed them of their collective bargaining rights.

"And in 1934 Perkins who advised President Roosevelt to ignore the pleadings of state and local officials for federal troops to quell the 1934 San Francisco General Strike. The successful resolution of that strike as well as countless others during her tenure as labor secretary laid the foundation for the rebirth of American labor."

And of course the conservatives were not happy about Perkins actions- they were very angry. And in 1939..."House Un-American Activities Committee brought an impeachment resolution" ,which was dropped for lack of evidents.
It is very clear Frances Perkins made a powerful difference at a time when if those who were only interested in their personal gain, even at the expense of the well being and even death of their fellow Americans. Sometimes, folks need a good kick in the pants and Thank You God for Frances Perkins and could we please have her back here in 2011? The good fight is on and we all need to understand who is in the working and unemployed Americans corner.
Posted by beingwoman at 7:59 PM