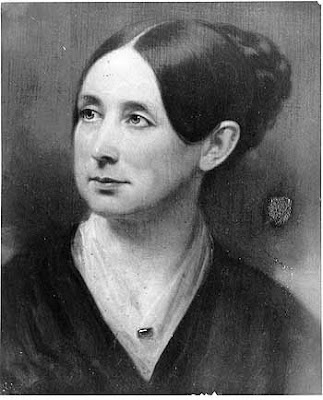 Born this day in 1802, Dorothea Dix, Author of "Social Bill for the Benefit of the Indigent Insane". Dix ran away from home at the age of 12 to get away from her alcoholic family and abusive father. In 1821, Dix opened a school for the well to do families of Boston and at her home she taught poor and neglected children. Because of poor health, Dix then spent the next several years writing for children "Conversations On Common Things", which explains anything from what is an acorn to how were the days of the week named and what do they mean?
Dix health did not improve and in 1836 a visit to England in hopes of a cure. And it is there,her interest in government helping those who insane and poor formed her opinion and inspired her work to come.
When Dix returned back to the United States she toured the many states to see how the poor insane were treated. It was a horror. People locked in cages, chained naked to walls, beaten and caned into going things- no compassion. SPeaking before Congress, and educating them about the cruel treatment. Land was set aside to build hospitals and the changing the laws to protect the poor and insane.
Dorothea's work changed the treatment of the mentally ill for the better.
And yes the Dorothea Dix Hospital which has been opened since 1848, is now threaten to be closed due to "budget shortfalls", not even during the Great Depression or the Civil War did this hospital close.
And yes, I am sorry, but corporate greed is robbing the poor and insane-- so they can be richer. Big government means me, you and our neighbors are in charge of what happens in our country.
Posted by beingwoman at 6:53 PM