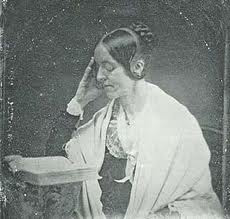 Born this day in 1810, Margaret Fuller (full name Sarah Margaret Fuller Ossoli)American journalist, critic and Women's Rights Advocate. Fuller was educated by her father,she was reading by the age of three and a half; she received the same education as any of Timothy Fuller's sons. This education was not lost on his daughter, she used her education to better the world.
Fuller taught at Alcott's school(Louisa May Alcott's father's school) And when the school closed, Fuller continued a dialogue with women by holding weekly "Conversations." Each conversation, Fuller would ask a question and the answers were discussed. Fuller's art of the conversation was provocative and thought provoking and very popular.
Fuller's next job was the first editor of the transcendentalist journal, "The Dial" in 1840. In 1844, Fuller joined the New York Tribune. It was said that Margaret
Fuller had the reputation as, "the best read person (male or female) in New England."
She was the first woman allowed to use the Harvard College Library.
In 1845, Fuller wrote the book,"Women in the Nineteenth Century" it is considered the first major feminist work in the United States.
Fuller was then sent to Europe as a correspondent for the New York Tribute, the first women to hold this job. In Italy, she met the love of her life,Giovanni Ossoli.
She gave birth to their son. Sadly, on the Ossoli's journey back to the United States, the ship wreaked on a sandbar off Fire Island. The Ossoli family did not survive.