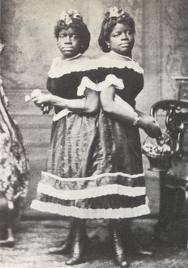 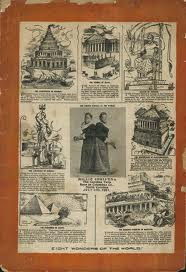 Born this day in 1851, Millie-Christine McCoy, con-joined twins. The McCoy sisters referred to themselves as one, even though the connection was below the waist. Born into slavery in North Carolina,and like most who looked "different" in the 18th and 19th century, Millie-Christine spent their lives traveling throughout the United States and Europe on display for any who would pay. "The Two-Headed Nightingale" and "The Eighth Wonder of the World". Or the Two-headed Girl, was the title of their act. They met Queen Victoria, traveled with Barum in the 1860's. In their 30's they were able to control how often they worked and traveled. The Carolina sisters inherited the family farm in North Carolina, and it there, Millie and Christine spent the quiet time of their lives.
Posted by beingwoman at 9:42 PM