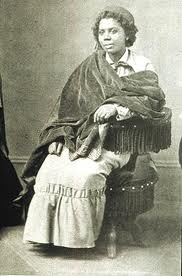 Born this day in 1845,Edmonia Lewis, artist, sculptor. Lewis claimed she was raised in the wild by her mother's family who were was Ojibway (Chippewa) Indian. Little is known of her father who was a free black. And her parents died when Edmonia was a child. Lewis did have an older brother, Samuel who was twelve years older and struck it rich in the gold rush. He paid for his younger sister's education, including a college education. Edmonia attended Oberlin College which was the first college to admit women and African-Americans for which Lewis fell into both categories.
While attending Oberlin, she was accused of poisoning two fellow female students. And few days later, she was dragged into a field and beaten badly. What was strange was these two students were sick, but quickly recovered. And Lewis was arrested after the attack. Lewis was acquitted and her supporters carried her out of the court on their shoulders.
Lewis moved to Boston to study with master sculptor Edward A. Brackett. But, really she wanted a studio and to start her own work. Again with the help of her brother Lewis was able to open a studio and Samuel had a business sign made to hang outside her studio,which read, "Edmonia Lewis, Artist."
In Boston, she met many abolitionists who befriended Lewis. One of her first works was a medallion of abolitionist martyr, John Brown. It met with commercial success. She then sculpted a bust of Robert Gould Shaw, leader of the all black regiment who died in battle. It was in the "Soldiers Relief Fair Show", and Lewis was able to sell 100 plaster copies of this bust.
Lewis' dream was to study and work in Rome, Italy. And this dream became possible with the income of the bust and with the help of her brother, Samuel. But, before leaving, Lewis traveled to Richmond, VA, to help the freed slaves. The year was 1864.
Rome was home to several female artists, and as Henry James called this group, "that strange sisterhood" and who were they? Harriet Hosmer, Louisa Lander, Anne Whitney, Margaret Foley, Vinnie Ream and Emma Stebbins.
Rome became Lewis' home. The wealthy American tourists would visit her studio and commission work. It is also noted that Lewis did her own sculpting and did not use the Italian artisans.
By 1873, Lewis a world renown artist. Her works include, The Veiled Bride of Spring, busts of Pre. Grant, Phillis Wheatley, Bishop Foly, The Adoration of the Magi an alter piece that includes Asian, Caucasian, and African-American cherubs and statue of the Holy Virgin for a church in Baltimore.
Lewis' master work, and her most controversial work was the statue, The Death of Cleopatra. This massive statue disappeared! How? Why? But, it was found in a salvage yard by a fire inspector in 1988. In 1995, it was restored to its former glory and placed in the Smithsonian National Museum of American Art.
And like her Cleopatra, Lewis disappeared, no one knows where or when she died.
Posted by beingwoman at 10:44 AM