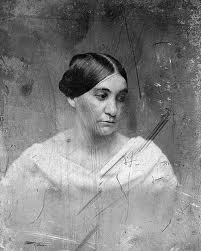 Born this day in 1824, Phoebe Cary, poet. Phoebe and her sister Alice wrote poetry on their family farm in Ohio. At the time, her sister Alice was more prolific, though Phoebe wrote less, her work today is viewed as more refine. The sisters both were published in their teens. Edgar Allen Poe and John Greenleaf Whittier recognized their work that the sisters published, "Poems of Alice and Phoebe Cary" in 1850. With positive reviews, the sisters moved to New York City. The Cary sisters held salons on Sunday evenings that began famous- they were famous. Phoebe was assistant editor for Susan B. Anthony's newspaper,"The Revolution". Both were published in regularly in national newspapers and magazines. Sadly, Alice (4 years older than Phoebe)suffering from exhaustion, died at the age of 51. Phoebe,heart broken died five months later, age 47.