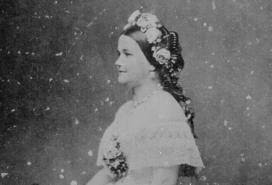 Mary Todd Lincoln was born this day in 1818. The 16th First Lady of the United States, yes, married to President Abraham Lincoln. As a young woman Mrs. Lincoln was smart, bright, passionate, fun loving and with a strong interest in politics. She was courted by many- but Lincoln was the one. The early years in Illnois, raising a growing family as Lincoln worked as a lawyer that lead to his political career which Mary supported. Their time in Office was during one of the most difficult times in the USA history. The Civil War, divided the country and families. Brother fighting brother. And Mary Todd's family was no exception. Though much of her family was Confederate- Mary supported and believed her husband's view.
Mary Todd Lincoln, lived with loss, of three of her children, brothers during the Civil War and then the assassination of Abraham Lincoln. Mary was sitting next to her husband when he was murdered and she walked with him to a room across the street from the Ford's theatre, she stayed with Lincoln until he died early the next morning. Mary Todd Lincoln was considered unstable and depressed. But, not without reason.
Posted by beingwoman at 2:48 PM