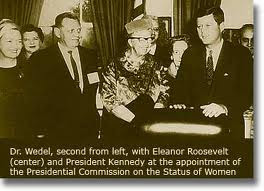 On this day in 1961, President John F. Kennedy created the "President's Commission on the Status of Women." Executive Order 10980. Resulted in the passage of the Equal Pay Act of 1963. This stated American women still are paid less than men.
President Obama has taken up the cause and on December 10th, 2010. Please read the following: www.whitehouse.gov/issues/women

The National Press Club of Washington D.C., on this day in 1971 voted to admit women to their membership. After excluding them since their foundation March 12, 1908.

Wilma P. Mankiller was sworn in as the first woman tribal chief of the Cherokee Nation; on this day in 1985 and served until 1995.
Posted by beingwoman at 8:18 AM