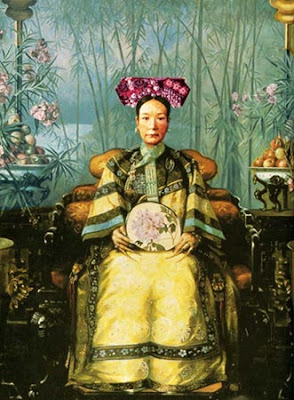 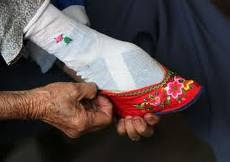 On this day in 1902 Empress Tzu-hsi of China forbids the binding of women's feet. Sadly, in 1911 the law was revoked. Why do women suffer for fashion.....sadly in this case in history, foot binding was forced on young girls around the ages of 4 to 7.

Born this day in 1878, Hattie Ophelia Wyatt Caraway. Caraway began her career in politics as the wife of Senator Thaddeus Carawy of Arkansas who served from 1920 until 1931. When he suddenly died. Govenor Parnell appointed Hattie Caraway to complete her husband's term. But, then Caraway surprised everyone when she announced she would run for another term and in doing so Caraway was..."the first woman elected to the U.S. Senate, the first woman to preside over the Senate, the first to chair a Senate committee, and the first to preside over a Senate hearing. She served from 1932 to 1945 and was a strong supporter of President Franklin D. Roosevelt's economic recovery legislation during the Great Depression."
I include this because of it's importance even today.
May 25, 1938, Caraway stated, “My philosophy of legislation, and really on life, is to be broad-minded enough to consider human relationships and the well-being of all the people as worthy of consideration, to realize that all human beings are entitled to earn, so far as possible, their daily bread, and to try to prevent the exploitation of the underprivileged."

On this day in 1892, Mrs. William Astor invited 400 guests to a grand ball at her lovely mansion and from that day forward there have been...the 400 social elite.
Posted by beingwoman at 5:11 PM