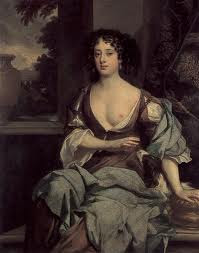 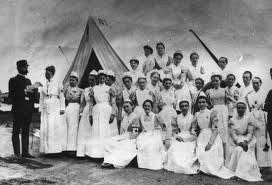 Born this day in 1650, Nell Gwyn, an actress and mistress to an British king. "Pretty-witty Nell",began her career age 14 at the London Bridges Street Theatre as an "orange girl". Orange girls sold oranges and other sweets to the audience. And as in the case of Nell, caught the eye of leading actor, Charles Hart, who trained Nell for the stage. That said, Nell Gwyn kept herself on the stage. Known for her beauty and her wit, a leading lady in the making and the new style of Restoration plays- they were made for each other. Her first play All Mistaken. Gwyn played opposite Charles Hart and a star was born. April 1668 is the year Nell met King Charles. By 1668, their relationship was known publicly. They had two sons. The oldest son named Charles the King made Earl of Burford,and later Duke of St. Albans.
Their younger son died at age 8 at school in Paris.

On this day in 1901, the Female Army Nurse Corps established as a permanent organization.
Posted by beingwoman at 9:14 PM