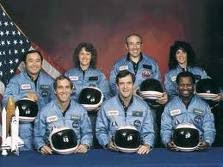 On this day in 1986,at 11:39 am EST, the Space Shuttle Challenger, "broke apart" 73 seconds after take off; all lives on board were lost. Judith Resnick and Christa McAulliffe, becoming the first women killed in the United States Space Program. McAulliffe was the first participant in the, "Teachers In Space Project".

On this day in 1906, Julia Ward Howe, became the first woman elected to the American Academy of Arts and Letters. Ms. Howe is most famous for writing, The Battle Hymn of the Republic

Born this day in 1903 in Ireland, Kathleen Lonsdale,a crystallographer(experimental science of arrangement of atoms in solids)In 1929, Lonsdale, "established the structure of benzene by X-ray diffraction". Lonsdale had many firsts as a female scientist,"Fellow of the Royal Society, first woman tenured professor at University College London, first woman president of the International Union of Crystallography, and first woman president of the British Association for the Advancement of Science."
Kathleen married Thomas Lonsdale and they had three children. The Lonsdales joined the Quaker Church because of their pacifist beliefs. Kathleen spent a month in prison during WWII, because she refused to support the war in any form.
Posted by beingwoman at 6:29 PM