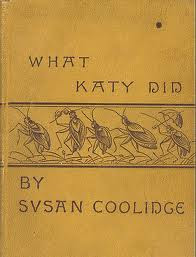 Born this day in 1835, Sarah Chauncey Woolsey, author of children's literature, her pen name was Susan Coolidge. She wrote 31 books and 5 book series. Her most famous series was, What Katy Did

Born this day in 1881, Alice Evans,a scientist that advocated for pasteurizing raw milk. Evans herself suffered from brucellois a chronic aliment also known as "Bang's disease, Crimean fever, Gibraltar fever, Malta fever, Maltese fever, Mediterranean fever, rock fever, or undulant fever." A worldwide common disease contracted by drinking raw milk, touching, eating meat from the animals carrying the bacteria. For years Evans shared her discovery and was ignored and scorned by the science community because she was a woman! When her scientific work was finally taken seriously, this disease fell into obscurity. Changing the health and welling being of millions of lives. And yes, Alice Evans was honored and respected for her life's work.
Posted by beingwoman at 8:21 PM