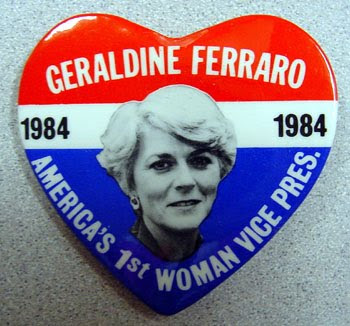 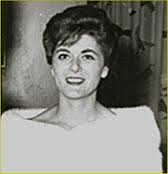 Today, March 26th, 2011,Geraldine Anne Ferraro died. Ferraro was a, "First Woman To" on several fronts. Most importantly in Ferraro's career, she was the first woman to run on a National Party Ticket,Mondale-Ferraro Democratic ticket of 1984. And from this moment in time if one looks forward or backward at Ferraro's timeline- there are extraordinary accomplishments.
Born and raised in New York, Ferraro was always an honors student, and she was able to attend college on scholarships and several part-time jobs. Starting out as an elementary school teacher, she quickly decided to go back to school for law. While teaching during the day and attending law school at night. Ferraro was the only one of two women to graduate from her class of 179. Earning a Juris Doctor degree with honors from Fordham University School of Law (1960). And was admitted to the bar of New York in 1961.
Marriage, children and working as a civil lawyer(would do pro bono cases for women court also) and then in 1970, Ferraro was elected president of the Queens County Bar Association. And in 1974, she was appointed Assistant District Attorney for Queens County, New York. And the following year Special Victims Bureau, prosecuting cases involving rape, child abuse, spouse abuse and domestic violence. And in 1977 Ferraro was appointed head of the unit with two assistant district attorneys assigned to her. And it was in this role Ferraro became a strong advocate for abused children. This was a very tough job both emotionally and physically. In 1978, she was admitted into the U.S. Supreme Court Bar.
Then, the same year 1978, Ferraro ran for Congress and won. Quickly gaining respect form fellows on the Hill. Always working for women's rights. And then 1984, the run for the White house as the vice-president on Walter Mondale's Democratic Ticket.
Ferraro helped with the elections of 1986, working for ten women up for election and eight won their seats. Pre. Clinton appointed Ferraro as a member of the United Nations Commission on Human Rights in 1993. And was then promoted to Ambassador to the United Nations Commission on Human Rights. And in 1995, Clinton appointed Ferraro vice-chair of the U.S. delegation to the landmark 1995 Fourth World Conference on Women in Beijing. Ferraro picked a strong group of expects in human rights issues to serve with her. And for the first time blocking China's motion to prevent their human rights record to be criticized.
Ferraro spent her in service to the well being of people, be it in a courtroom or at world conference, she was there with a strong no nonsense sensibility. And as Ferraro felt about her firsts- she was happy to be first, but only if it meant there was a second, third and so on. Thank you, Gerry, and Peace.


On this day in 1973, ten women were admitted as members of the London Stock Exchange.
Posted by beingwoman at 1:01 PM