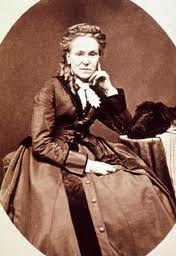 Born this day in 1826, Matilda Josyle Gage,one of the founding members of the National Woman Suffrage Association, activist, author, abolitionist,free-thinker.
When the Rev. Loguen(Syracuse conductor of the Underground Railroad)came to Fayetteville, NY(home of Gage) in search of safe house for the Railroad. Gage welcomes the Railroad into her home. ‘An Underground RR Station’ where runaway slaves were helped on their way to freedom." Providing a place for food and rest. Being a part of the Underground Railroad- Gage viewed as her most important service, defying the law(Fugitive Slave Law of 1850) for the human rights of those traveling the Underground Railroad.
In 1852,Gage joined the women's right movement. And it was at the National Woman's Rights Convention of 1852, Gage gave her first public speech. Serving over the next several decades as either a chair or vice president and from 1875-76 as president of NAWSA. At the 1876 Women's Convention the police showed up claiming it was an illegal assembly. Gage successfully argued against the claim that it was an illegal assembly. The police left without pressing charges.
In 1875 Gage, Elizabeth Cady Stanton and Susan B. Anthony, began to co-author History of Women Suffrage 1843-1883 the first three volumes. In all there were six and not completed until 1922.
Gage was editor of The National Citizen and Ballot Box from 1878 to 1881 the official newspaper of NAWSA. Gage was also editor of The Liberal Thinker from 1890 until her death.
Gage would also correct what was being written out of his-tory and so here is a bit of her-tory:

Concerned with the way in which women were written out of history, Gage documented many previously unacknowledged accomplishments of her sex. She maintained that the cotton gin wasn't really invented by Eli Whitney, but rather by Catherine Littlefield Greene, who had the idea for the gin and engaged Whitney to construct it. Gage argued that the Tennessee Campaign of 1862, an important military campaign which changed the course of the Civil War was actually the brainchild of Anna Ella Carroll.

You might be asking yourself why you have never heard about Matilda Gage, who was as much a part of the forming of Women's Suffrage Movement as Anthony and Stanton. As the suffrage movement continued, Gage became more dis-satisfied; and saw the Church as "bulwark of woman's slavery". Gage and Elizabeth Cadey Stanton co-authored, The Woman's Bible published in 1895. And yes, many were upset by this Bible.
And then Gage's radical views drew a wedge between herself and Stanton and Anthony. They had worked together over the last 40 years. Finally, Gage left NWASA and formed the "Woman's National Liberal Union", viewed as the most radical movement in the United States. And so the last eight years of Gage's life, she was separated both in the physical and then in history from Anthony and Stanton. So, remember whenever you read about Anthony and Stanton from 1852-1895, Gage was there too.
To learn more about Matilda Joslyn Gage and there is much more visit her website: www.matildajoslyngage.org

In 1993, scientific historian Margaret W. Rossiter coined the term "Matilda effect", after Matilda Gage, to identify the social situation where woman scientists inaccurately receive less credit for their scientific work than an objective examination of their actual effort would reveal. The "Matilda effect" is a corollary to the "Matthew effect", which was postulated by the sociologist Robert K. Merton.

Oh and her son-in-law L. Frank Baum, who wrote that wonderful book, The Wizard of Oz Gage was an influence of his "feminist utopian vision of Oz."
Posted by beingwoman at 4:56 PM