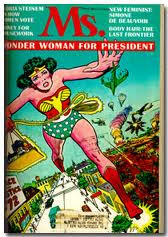 On this day in 1972, Ms.Magazine began publication. But it was in December of 1971, that Ms. began as a "one-shot" sample insert in New York Magazine. Ms. recognizes this date as their beginning. Letty Cottin Pogrebin was the founding editor. And this editor stated,"Ms. authors translated a movement into a magazine."
Ms. Magazine is online www.msmagazine.com

On this day in 1971, the state of Washington became the first state to ban sex discrimination!
Posted by beingwoman at 3:28 PM