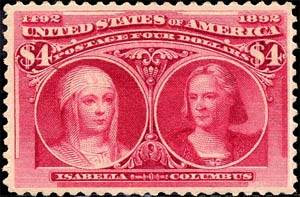 On this day in 1893, the United States Post Office issued its first stamp to have an image of a woman. And who did they choose? Queen Isabella, queen of Spain. Columbus is the other image appearing on the stamp.
In 1902, US Post Office issued a stamp with the portrait of Martha Washington, all by herself.

On this day in 1903, President Teddy Roosevelt shut down the Post Office in Indianola, Miss. Because the township demanded their Postmistress Minnie M. Cox to resign; who had held the office of Postmistress since 1891. And why the change of heart? Jim Crow laws. Mrs. Cox was a woman and black. For fear of harm, Cox submitted her resignation which President Roosevelt refused. Instead, he shut down Indianola's Post Office and routed their mail to a neighboring town until they accepted their Postmistress, who was receiving full pay while Indianola made up their mind. A year later the post office was re-opened- Postmistress Cox had served her 4 year term and did not return for another term for fear of harm to herself and her family.

On this day in 1890, Alice Sanger became the first female White House staffer. Well, the first official woman.
Posted by beingwoman at 7:35 PM No comments: 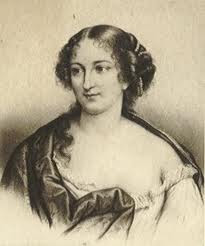 Born this day in 1638, the french poet and playwright, Antoninette de Ligier la Guarde Deshoulieres. As a child she received a formal education in many subjects and Deshoulieres studied under the poet, Jean Hesnault. Desoulieres wrote in many of the styles poetry: odes, idylls, elegies, ballads and madgringals. Deshoulieres was also a great beauty which lead to many compromising moments in her life which she seemed to have used to her advantage without loss of talent or virture. Fellow writers (men) compared her to the Tenth Muse, Sappho. Elected membership to the Acedemy of the Ricovrati of Padua and the Academy of Aries. A great feat at this time in her-story!
"No one is satified with her fortune, nor dissatified with her intellect."
I did change the his to her. Happy New Year!
Posted by beingwoman at 1:16 PM No comments: