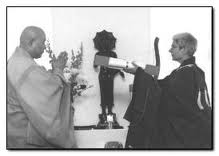 Born this day in 1948, Svetlana Savitskaya, was the second woman in space.

On this day in 1950, Florence Chadwick swam the English Channel from France to England in 13 hours, 20 minutes, breaking Gertrude Ederle's record. In 1951 Chadwick became the first woman to swim the Channel from England to France in 16 hours and 22 minutes.

On this day in 1890, the Daughters of American Revolution organize.

On this day in 1977 Maurine Stuart,or Mother Roshi ,was the first female Zen Master granted to teach in the United States. In 1979, was president and spiritual director of the Cambridge Buddhist Association. Mother Roshi died Feb. 26th, 1990.
Posted by beingwoman at 9:14 PM No comments: