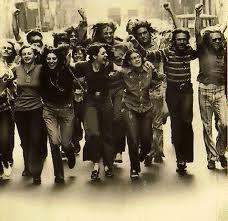 On this day in 1969, the Stonewall Riot took place in New York City. The Stonewall was a gay and lesbian bar which the police would raid whenever, what? the mood struck? No one would fight back and many were carted off to jail. June 28th, 1969 was the night the patrons of the Stonewall fought back which heralded in a new chapter in Gay and Lesbian Rights.

On this day in 1976, the first women one hundred and fifty seven of them began the United States Air Force Academy.

On this day in 1996, the South Carolina military School, The Citadel voted to admit women to keep their public funding.
Posted by beingwoman at 10:10 AM No comments: