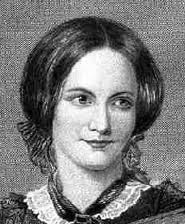 Born this day in 1816, Charlotte Bronte, well known author. A poet and novelist and the oldest one of three famous, mysterious and sickly sisters. Charlotte is best known for her novel, Jane Erye which was published in 1847 under her pen name Currer Bell. It was an immediate success. Charlotte's other pen names were, Lord Charles Albert and Florian Wellesley. Charlotte's younger sisters were, Emily, who wrote, Wuthering Heights and Anne, who wrote, Agnes Grey. Their brother Branwell was a painter and poet. Their childhood was filled with creativity. Drawing and writing about their make believe world ,Angria. Sadly,Emily and Branwell died in 1848 and Anne in 1849. Charlotte died during her first pregnancy in 1855 at the age of 38. Charlotte was considered a visionary and a modern woman. Her point of view on relationships between men and women- in one word- equality. Marriage was a union mutual respect. Charlotte received many marriage offers. And in 1853 accepted Rev. A. B. Nicholls,a man she did respect, but did not love.
There are many articles, books, films, paintings and drawings (thanks to Branwell), and websites that go into great detail and theory about Charlotte Bronte and the Bronte family. I recommend the following.
www.victorianweb.org/authors/bronte/cbronte/lowes1.html
I Love Charlotte Bronte, Michelle Daly 2009

“I am neither Man nor Woman – I come before you as an Author only.” Charlotte Bronte
Posted by beingwoman at 11:04 AM No comments: