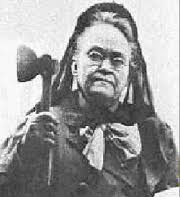 On this day in 1901, a group of women attacked twelve saloons in downtown Kansas City. Kansas. Carry Nation lead this rampage against bars and saloons selling alcohol "that is killing the men and women of the community." As part of the temperance movement Nation used vandalism to get her point across. Mrs. Nation was a large woman who described herself as "a bulldog running along at the feet of Jesus, barking at what He doesn't like." At first, Nation would walk into a saloon and sing hymns and pray. Then, Nation believed God put a rock in her hand. So Nation now would walk into a business serving alcohol singing hymns and throwing large rocks at the bottles of liquor. And then at the advice of her husband, Nation used a hatchet which became her calling card "Hatchation". Which she believes improved her cause for temperance. WIth the added hatchet in hand and the Bible in the other hand, Carry Nation was arrested over 30 times for marching into the saloons announcing she was there to save the drunkards lives! The news of Carry Nation's work became widely known. And to fund her work and bail money, Carry Nation sold souvenirs hatchets, booked lecture tours and ran a biweekly newsletter, The Smasher's Mail and the newspaper, The Hatchet
Posted by beingwoman at 6:59 PM No comments: