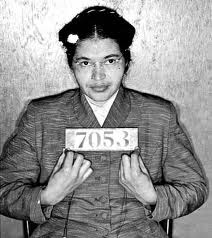 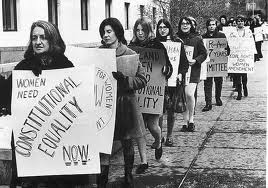 Born this day in 1913, Rosa Parks, a leader in Civil Rights. December 1st,1955 in Montgomery, Alabama the Civil Rights Movement began with one humble act of civil disobedience. Rosa Parks refused to give up her seat on the bus. No one special,a woman, who knew if she did not give up her seat, she could be arrested, fined and or jailed. This demand to give up her seat on the bus, was a symbol to give up her rights. And Rosa Parks refused. She was arrested and the Civil Rights Movement was born. Rosa Parks courage was like a spark, lighting the way for a Nation to see that all people are equal. Rosa Parks remained a leader in the Civil Rights Movement. Like any Social Justice issue be it Slavery, Suffrage, Civil Rights, many suffer and many die for the Cause, so that many more will live without the cruel injustices placed upon the innocent lives.
In 1977, Parks founded The Raymond and Rosa Parks Institute for Self-Development. The Institute sponsors an annual summer program for young people to travel throughout the United States on buses visiting and learning the history of their country. President Clinton presented Rosa Parks with the Presidential Medal of Freedom in 1996. She received a Congressional Gold Medal in 1999.

Born this day in 1921, Betty Freidan, she also died on this day 2006. An author and activist, Friedan is best known for her book,The Feminine Mystique, published in
1963. This book and Friedan herself were central to the re-kindling the Feminist Movement. This book set a fire in the hearts and gave a voice to of millions of women who longed for an identity outside of the care of family. Freidan lectured throughout the world raising awareness of women's issues. She wrote The Women's Movement in 1976, in 1981 she published Changed My Life: Writings on the Women's Movement and in 1993 The Second Stage The Fountain of Aging in Fall.
Freidan was the founder of the National Organization for Women. And Freidan worked toward the passage of, The Equal Rights Amendment. Women today are still not protected under the United States Constitution. Feminism is a word so mis-understood in society. This is what the word means. Feminism: "the doctrine advocating social, political, and all other rights of women equal to those of men." That is all. Anything else is fear and here say.
Posted by beingwoman at 8:12 PM No comments: