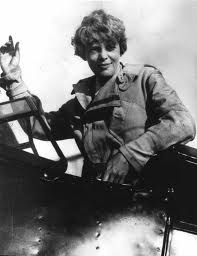 On this day in 1928, Amelia Earhart began her record-breaking Trans-Atlantic flight.

On this day in 1971, Jeanne M. Holm, becomes the first brigadier general in the United States Air Force, and in 1973, she was promoted to major general.
Posted by beingwoman at 11:59 AM No comments: