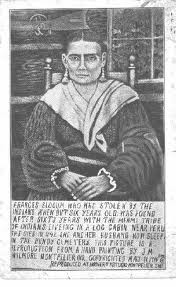 Born this day in 1773, Frances Slocum or Maconaquah (The Young Bear). Maconaquah's biological family, the Slocum's' were part of the Quaker settlement in Wyoming, Pennsylvania. On November 2,1778, during the Battle of Wyoming, Maconaquah at the age of 5, was captured by the Lenape tribe. It is believed that the first night of capture, Maconaquah escaped and found by the Miami Tribe which became her adopted family. 59 years later, her biological brother found her on an Indian Reservation near Peru, Indiana. Maconaquah refused to leave with them; to leave her family of the last 59 years..., being married twice with four children, this was her home and her life. There are many schools, parks, and even a bank named after Maconaquah.


Born this day in 1815, Myrtilla Miner, educator. Miner began teaching at the age of fifteen in home state of New York. Miner was later hired to teach in Whitesville, Wilkinson County, Mississippi for a planter's daughter. It was there that Miner found her calling. As witness to the evils of slavery, Miner knew she would dedicate her life to improving their lives. With the gift of one hundred dollars, on December 3rd, 1851 Miner and six students opened Normal School For Colored Girls in Washington DC, tution was free. It was an apartment and by the second month, there were 40 students. By 1853, a permanent location was found and with the benefactor Harriet Beecher Stowe, donating the proceeds from Uncle Tom's Cabin, of 81,000, the school's
success was sealed. Today the name is the University of the District of Columbia.

On this day in 1933 Frances Perkins, was the first woman appointed to serve on the president's cabinet as Secretary of Labor.
Posted by beingwoman at 10:16 AM No comments: