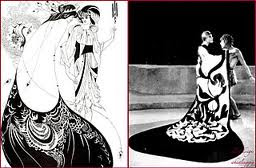 Born this day in 1897, Winifred Shaugnessy, who became, Natacha Rambova. Ballet dancer, set designer, costume designer for stage and film and...she was Rudolph Valentino's second wife! As a set and costume designer, she was an innovator, bringing Art Deco,and Nouveau to Hollywood with her style. Rambova worked on over 15 films all during the silent film era, to name a few titles Salome, A Doll's House, and The Woman God Forgot. Rambova's work is amazing and she was beautiful, no wonder the silent film idol fell in love with this talented beauty. But, the marriage didn't last Rambova wanted to control Valentino's film career by getting him to turn down the screen idol characters. Oh well.

On this day in 1966, Indira Gandhi was elected Prime Minster of India. Gandhi remained Prime Minster until 1977 and then re-elected in 1980 to the office again and remained until her assassination in October 1984. Gandhi was the longest term female Prime Minster in the world. She changed the face of India.
Posted by beingwoman at 3:44 PM No comments: