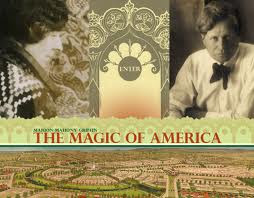 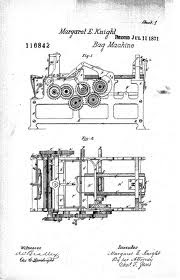 On this day in 1920, the League of Women voters was founded.

Born this day in 1838, Margaret E. Knight, an inventor of the 19th century. You know that paper bag that is carrying your lunch, groceries...well the fold of the paper bag and way it is glued on the bottom was invented by Knight in 1868! She worked most of her life in the cotton mills. While fitting the model for the patent, Charles Annan stole the idea. But a successful law suit and Knight founded the Eastern Paper Bag Company. Other inventions included, a numbering machine, window frame and sash and several devices relating to rotary engines. Margaret Knight was the holder of 87 U.S.patents.

Born this day in 1871, Marion Mahony (Griffin),one of the first women to be licensed architect in the world. Mahony graduated from MIT in 1894 and began her career working briefly with her cousin Dwight Perkins and then with Frank Lloyd Wright for the next 14 years. One of the original members of the Prairie School. During this time Mahony designed murals, mosaics, furniture, leaded glass, and lighting fixtures. Wright consider Mahony one of the best architects on his team. Mahony voice in home design still echos today. (examples above)
Posted by beingwoman at 9:50 AM No comments: