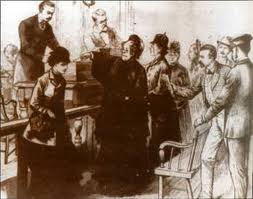 Born this day in 1831, Myra Colby Bradwell. Bradwell fought for the rights of women to be practicing lawyers in the United States. All the way to the Supreme Court.

On August 2, 1869 Myra Bradwell passed the Illinois bar exam. After being denied admission to the Illinois Bar, she filed suit, reaching the United States Supreme Court, claiming that refusing to admit her to the bar because she was female violated her 14th Amendment rights. The Supreme Court held that the Privileges and Immunities Clause of the Fourteenth Amendment did not include the right to practice a profession. Justice Joseph Bradley wrote: “The natural and proper timidity and delicacy which belongs to the female sex evidently unfits it for many of the occupations of civil life...[T]he paramount destiny and mission of woman are to fulfill the noble and benign offices of wife and mother. This is the law of the Creator." Bradwell v. Illinois, 83 U.S. (16 Wall.) 130 (1873).

And then in 1872, the state of Illinois “No person shall be precluded or debarred from any occupation, profession, or employment (except the military) on account of gender." Bradwell was a practicing lawyer for two years before her death.
It must be noted, women in the United States are not protected under the Constitution.
Posted by beingwoman at 6:59 PM No comments: