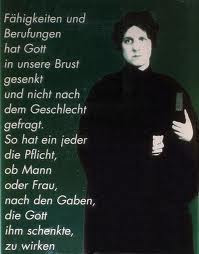 "Although the world is full of suffering, it is
also full of the overcoming of it."
~Helen Keller

Born in Berlin, Germany in 1902, Regina
Jonas was the first female Rabbi. After
completing her studies- she wrote, "Can
a Woman be a Rabbi According to
Halachic Sources?" The answer was-yes.
Ordained in 1935. As the Nazi came to
power many rabbis emigrated- ironically
allowing Rabbi Jonas to preach in the
synagogues. She was arrested in 1942-
deported to "Theresienstadt" she worked
meeting the trains and giving hope and
courage to those entering the camps. She
wrote and preached 24 lectures. At age 42
Rabbi Jonas was murdered in Asuchwitz.

Born this day in 1905, founder of the "Gray
Panthers", Maggie Kuhn. Considered by
may to have started a contemporary culture
revolution- she redefined the meaning of age
and her battle cry,"young and old together."
Ms. Kuhn brought forward the social issues
of the elderly.

Born this day in 1923, Anne Klein, founder
of the label Anne Klein. She defined
the American women style of the 1960's
and though Anne Klein died suddenly in
1969 her company is still at the top of
fashion world today.

Martha Stewart was born this day in 1941.
Founder of Ominimedia, Ms. Stewart one
of the most well known business women
of our time. She has television, radio,
magazines, and books all in the service
of home and hospitality.

(Today's blog was first used in 2006, after reading it,
I felt it deserved repeating.)
Posted by beingwoman at 4:55 PM No comments: