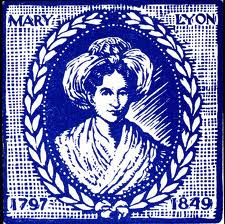 Born this day in 1797, Mary Lyon, who in 1837 founded Mount Holyoke Female Seminary. Ms. Lyon began her teaching career at the age of seventeen, when she was invited to teach summer school in Shelbunrne Falls,Massachusettes. Ms. Lyon used her income to further her education by learning new teaching methods.
In 1834, Lyon decided to stop teaching raise funds for a woman's seminary accessible to young women of "modest means." Traveling throughout the New England area with her green velvet purse. Lyon raised the funds necessary and the school kept costs down by relying on church groups making quilts for the students and everyone helped with the up keep of the school.
One of Mount Holyoke's more famous students was Emily Dickenson, who attended for one year in 1847. The Seminary was also interested in their student's religious life. They were divided into three groups, those who proclaimed Christ, those who were hopeful and those who were hopeless in their relationship with Christ, Ms. Dickenson was among the hopeless.
Mary Lyon was a woman who believed in women capable of higher learning at a time when it was generally considered a waste of time. Mary Lyon died April 5th,1849. Lyon vision is Mount Holyoke College today. The school honors their founder each year on her birthday.
Posted by beingwoman at 8:29 AM No comments: