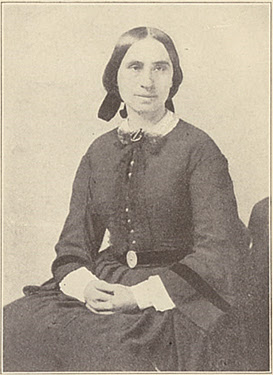 Born this day in 1824, Maria Zakrzewska, pioneering physician. Zakrzewska was born in Berlin, Germany. Her grandmother was a veterinary surgeon, and her mother worked as a midwife. After her education in Germany and teaching for a year at the college; in 1853 Zakrzewska left for the United States. The first year, she worked in as a contract worker as a knitter in a home and then Zakrzewska met Dr. Elizabeth Blackwell. It is Blackwell that helped Zakrzewska attend Cleveland Medical College.
Dr. Blackwell's sister Dr.Emily Blackwell and Dr.Zakrzewska began their planning and fund raising to open a hospital for women and children and medical school for women. And in 1857, the New York Infirmary for Women and Children (now Beth Israel Medical Center).
In 1859, Dr. Zakrzewska moved to Boston to teach in the New England Female Medical College, which was a school of midwifery. Dissatisfied with the college, Zakrzewska convinced the Board of Lady Managers to open a new teaching hospital. The New England Hospital for Women and Children, opened in 1862. A ten bed hospital, became another building very quickly. An all female staff. Dr. Caroline Still, was invited to do her internship there. 1872 the hospital opened the first professional nursing school in the country. Their goal was to have a better hospital school than all males schools and by 1881 the school so well respected; the need to limit enrollment medical students already with an MD. Dr. Zak did have a private practice and in 1902 she died. But, Doctor Maria Zakrzewska changed the face of the education of medical field in the United States for the better.
Posted by beingwoman at 8:08 PM No comments: