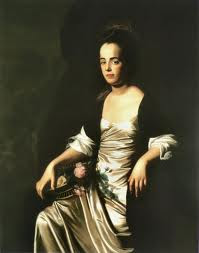 Born this day in 1751, Judith Sargent Stevens Murray, author and feminist. As an essayist Murray used this platform as a way to advocate for women's rights. One outstanding essay, "On the Equality of the Sexes," Written in 1779 and published in the Massachusetts Magazine in March and April 1790. One must point out it does pre-date Mary Wollstonecraft, A Vindication of the Rights of Woman, published in 1792. Both visionary and important.
Murray received the acceptable education given to a daughter of her times, but it was when her brother two years younger education was more in depth...Murray questioned this treatment, the logic. So she was self-taught in many of her studies. Murray believed women deserved a good education and their parents should teach their daughters to "reverence themselves", which would prepare women to be fully realized citizens.
In 1770, Murray's family embraced Universalist faith which Judith followed the rest of her life.
Judith's first marriage to the sea captain John Stevens. Stevens did have great debts and to avoid prison he fled to West Indies. It is there he died in 1786. Their marriage did not produce any children. This poverty is one of the reasons, Murray turned to publishing her writings about women's rights and issues. And also during this marriage, Murray began to keep an historical record of her letters that were not discovered until 1984. These letters hav revealed a true account of American history at this time. And a rare look into a woman's life in this time period.
A second marriage to Universalist John Murray produced two children, the first a boy who only lived a few hours and then their daughter who lived to the age of 31. Even as mother and wife, Murray kept up her literary work and wrote under these assumed male names to allow the work to speak for itself-the pen names "Constantia," "The Reaper," "Honora Martesia," and, most famously, as her male persona "Mr. Vigilius"
Murray's three-volume 1798 book of essays and plays titled The Gleaner, established her as a leading author and intellect, and as an advocate for women's equality, education, and economic independence. Essays in The Gleaner also championed the new republic; considered citizenship, virtue, and philanthropy; decried war and violence of any kind; and discussed Universalism, Murray's chosen faith. The book was purchased by such prominent figures as George Washington, John Adams, Henry Knox, and Mercy Otis Warren.


“Will it be said that the judgment of a male of two years old, is more sage than that of a female's of the same age? I believe the reverse is generally observed to be true. But from that period what partiality! how is the one exalted, and the other depressed, by the contrary modes of education which are adopted! the one is taught to aspire, and the other is early confined and limited. As their years increase, the sister must be wholly domesticated, while the brother is led by the hand through all the flowery paths of science. Grant that their minds are by nature equal, yet who shall wonder at the apparent superiority, if indeed custom becomes second nature”(1).


Murray moved to Natchez, Mississippi, to be with her daughter's household and it is there she died June 9th, 1820. It is also here that her work is being transcribed by the Judith Sargent Murray Society.
Posted by beingwoman at 10:39 PM No comments: