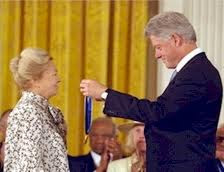 Born this day in 1926, Mathilde Krim, medical researcher, health educator of HIV/ AIDS. In 1981, as the first cases of HIV AIDS were reported, Krim was one of the first to understand the enormity and the impact of the AIDS virus could have on society. She changed her research work to researching and then the great need of education about AIDS. In April 1983, Krim founded the AIDS Medical Foundation (AMF), the first private organization concerned with fostering and supporting AIDS research. In 2000, Krim recieved the Presidential Medal of Freedom for all her work and continued work. To learn more about AIDS research and Krim's work, www.amfar.org

On this day in 1891, Irene Coit became the first woman admitted to Yale University.

On this day in 1982, Margaret Thatcher began her 2nd term as Britain's Prime Minister.
Posted by beingwoman at 12:32 PM No comments: 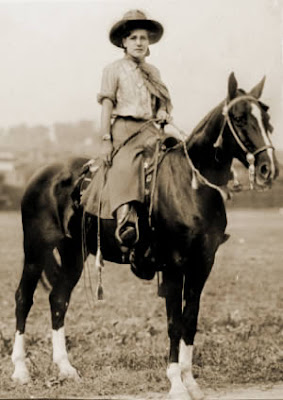 On this day in 1911, Nan Aspinwall became the first woman to complete a solo trip across country by horse. A cow-girl known as Two-Gun Nan, she and her horse Lady Ellen, rode out of San Franco, CA., alone, riding east, toward New York, 4496 miles away. It took 180 days, and Two-Gun Nan only had to use her gun twice, a run in with two inhospitable towns. She was 31 and it must be noted that Nan rode "astride" and wearing pants and or skirt pants- which illegal in part of the United States!

On this day in 1977, Sabra Starr finished the longest recorded belly dancing, 100 hours!
Posted by beingwoman at 9:44 AM No comments: