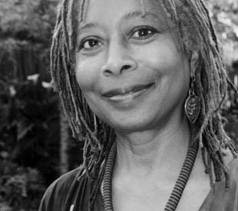 Born this day in 1944, Alice Walker, critically acclaimed" Poet, short story writer, novelist, essayist, anthologist, teacher, editor, publisher, womanist and activist."
She graduated from high school 1961, class valedictorian. She was also crowned homecoming queen. After high school, Walker first attended Spelman College in Atlanta, Georgia and it was there she worked with the civil rights movement. In 1964,Walker continued her education at Sarah Lawrence and it was there Alice Walker committed her talents to being a writer.
In 1965, Walker accepted a position with The New York Welfare Department. A year later with a grant of 2,000 dollars she moved to Jackson Mississippi to work with the Legal Defense Fund of NAACP. Taking deposition of blacks who had been evicted from their home for registering to vote. Walker published her first novel in 1967, titled "To Hell With Dying". But the book that turned Walker into an international name was her novel, "The Color Purple" which she also was awarded the Pulitzer Prize for Fiction. Walker continues to write and impact our society and raise our awareness with work that deals with women's issues.
On International Woman's Day, March 8, 2003, the eve of the Iraq War, Alice Walker joined the anti-war protest and was arrested for crossing the police line with 24 other women. This her comment about why she joined hands.
I was with other women who believe that the women and children of Iraq are just as dear as the women and children in our families, and that, in fact, we are one family. And so it would have felt to me that we were going over to actually bomb ourselves."
Alice is active today in Code Pink She is dedicated to making the world a better place and to raise awareness of the injustice going today, just a moment ago, and now. To learn more about this amazing artist/activist: www.alicewalkersgarden.com


Born this day in 1814, Lydia Pinkham, a woman who suffered "female troubles" that turned into a multi-million dollar business still active today. A very painful menstrual cycle and knowledge about roots and herbs,and with 18% alcohol, Pinkham brewed up a concoction in her kitchen that relieved her suffering. She shared her "Herbal Formula" with any woman in need. But the Panic of 1873, ruined Pinkham's husband and lost all his money. Out of need of an income, she began to charge for her Herbal Formula. In 1876, she patented her recipe as "Mrs Lydia E Pinkham's Vegetable Compound." To advertise her formula Pinkham wrote pamplets and handed them out of the streets. They read,"All those painful complaints and weaknesses so common to our best female population, including everything from flatulence to all ovarian troubles. She also advertized in the women's magazines! Both written in English,French, and Spanish. At a time, when the medical profession(male physicians) lacked understanding of women's health and needs. And did not want to discuss it in mixed company... Lydia Pinkham invited her clients to write to her about their "women's ailments" and ask questions. And those questions were answered. Answers that wrote honestly about women's health. Ground braking! At her death the company was grossing 300,000. per year. The mostly male dominated medical field called Pinkham in her lifetime, "snake-oil-peddler." But, as Mrs. Pinkham said,"Only woman can understand woman's ills."
Posted by beingwoman at 4:19 PM No comments: