On this day 1981, Susan Day O'Conner became the first woman of the United States Supreme Court.

Born this day in 1884, Doctor Ethel Percy Andrus, an educator and founder of  NRTA  and AARP.  Dr. Andrus began her career as a teacher, and she also was the first woman to serve as a  high school principal. In 1947 Dr. Andrus realized retired teachers were living on a very small wages and without health care. She founded the National Retired Teachers Association.  To solve the problem of one group she solved the problem of millions of retirees by creating the American Association of Retired Persons and the monthly magazine which is still being published today.

"What I spent, is gone; what I kept, I lost; but what I gave away will be mine forever."
Ethel Percy Andrus

Posted by beingwoman at 10:54 PM No comments:

Born this day in 1822, Elizabeth Smith Miller, a suffragist and abolitionist, she was best known for freeing herself from the Victorian dress code for women.  Most women of the Suffrage Movement viewed the constraints of  the corset and huge skirts upon skirts a horror to wear!  As Ms. Miller wrote in her diary:
I was also blessed by the tonic of Mrs. Stanton's inspiring words: "The question is no longer [rags], how do you look, but woman, how do you feel?"  And the Mrs. Stanton she refers to is the one and only Cady Stanton who was one of the leaders of  American Suffrage Movement.
Woman!  How do you feel!?  Little did I know when I began this blog in 2006 women in the United States would be attacked about how we use our bodies.  It is barbaric.  Stand strong and vote this mind set out of office and out of our lives!

Also on this day, Belva Ann Lockwood was nominated by The Equal Rights Party (formed in 1872) as their presidential candidate for 1884.  Yes, 1884.  And Ms. Lockwood wasn't the first nominee, Victoria Woodhull was  and she offered Frederick Douglas as her running mate.  See, women were banned from voting, but there was no law preventing them from running for office.  Ms. Woodhull paid a great price for even trying for public office.  Slander which landed her in the courtroom to defend herself of crimes which were all thrown out, but the damage was done. Woodhull was bankrupt. 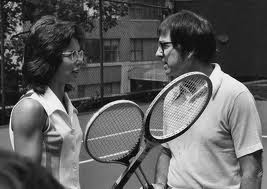 On this day in 1973, Billie Jean King beat Bobby Riggs. Oh yes, the "man versus woman" tennis match aired on television and the Lady took  the prize!  There was never any doubt.
Powered by counter.bloke.com

Posted by beingwoman at 1:15 PM No comments: