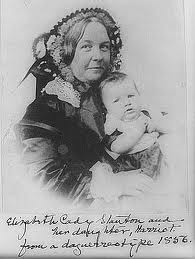 On this day in 1840, well known suffragist, Elizabeth Cady Stanton married her true love, Henry Brewster Stanton. Elizabeth and Henry made a major word change in their wedding vows, the word obey was omitted. The couple were true feminists.
And Elizabeth presented Declaration of Sentiments,at the Seneca Falls Convention in 1848. Elizabeth, Susan B. Anthony, and Matilda Josyle Gage were the engine in the Women's Suffrage Movement in the United States. Elizabeth Cady Stanton was a shining example of how strong women are; in the mist of her work for women's suffrage... Stanton had six children and the last when she 44! And the Stanton's children lived into adulthood.