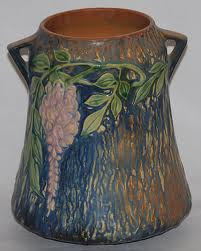 Mitchell wrote the first book on classical sculpture published by an
American and was one of the first women to study seriously classical archaeology. She
represented the transition from amateur to professional in American classical
archaeology.

Born this day in 1849, Maria Longworth Nichols Storer, founder of the Rookwood Pottery of Cincinnati,Ohio. As many women of the day painting ceramics was a popular practice. In 1876, Maria (pronounced Mar-EYE-a)own work was on display at the Centennial Exhibition in Philadelphia. It was here that Longworth attended the ceramics of Japan. The exhibition inspired Longwoth's work like none other and truly her muse in her own ceramics. Longworth's art was amazing and her name as an artist was world re-noune. In 1879, Maria started her own pottery.
Her work was exhibited at the 1876 Centennial Exhibition in Philadelphia. While attending the exhibition she was captivated by the ceramics on display from Japan. The Japanese aesthetic was to be her greatest artistic influence. Wanting "a place of my own where things could be made," Maria rented a studio at Frederick Dallas' Hamilton Road Pottery in 1879. When this proved unfavorable, she decided to start her own pottery. Joseph Bailey chemist and potter headed up a small staff of both man and women. In 1882, Longworth won a gold medal at the Tenth Cincinnati Industrial Exposition for her work. In 1889 she won a gold medal at the Paris Exposition and it is in 1889 that Longworth handed the company over to William W. Taylor.
It must be noted that during this time, Longworth's first husband Nicholas died and within a few months, Maria married Bellamy Storer. And his work took them to Europe.
Posted by beingwoman at 4:10 PM No comments: