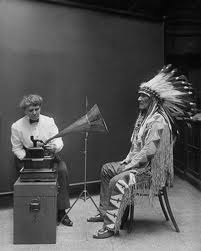 On this day in 1881, Clara Barton founded the American Red Cross.

On this day in 1918, the House of Representatives past an amendment ALLOWING women to vote.

On this day in 1932, Amelia Earhart was the first woman to fly the transatlantic solo flight.

On this day in 1945,the classic film couple Lauren Bacall and Humphrey Bogart got married.

Born this day in 1867,Frances Theresa Dansmore,ethnomusicologist whose life work was to preserve Native American Music by making recordings, and collecting musical instruments and other objects. Dansmore began her studies in music as a child and moved to Boston to study piano at Harvard College. It is here that Dansmore, learns about another pioneer in ethnomusicologist, Alice Cummingham FLetcher and her work with Omaha Indians in 1880.

In 1893 Densmore began a ten-year preparatory period of study during which Fletcher was a teacher, mentor, and friend. Densmore began to give public lectures on musicological subjects, during this time. The year 1901 brought Densmore's first publication, her first visit to the Chippewa of Ontario, and her first transcription of a Sioux song.

In 1907, after submitting a recording of Indian songs to William H. Holmes, then chief of the Bureau of American Ethnology (BAE) of the Smithsonian Institution, Densmore began a fifty year relationship with the BAE. During this time, Densmore recorded American Indian music for preservation, and collected musical instruments, herbs, and other materials used in conjunction with songs; recorded a wealth of ethnographic data, and took numerous photographs.

"My work has been to preserve the past, record observations in the present, and open the way for the work of others in the future"-Densmore 1942.
Posted by beingwoman at 10:19 AM No comments: