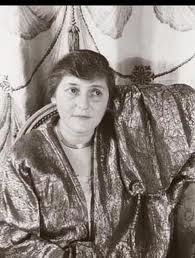 Born this day in 1880, Aline Bernstein. Theatre designer of scenery and costumes.
Bernstein was also co-founder of the Museum of Costume Art which merged with Metropolitan Museum of Art in 1937. Bernstein began her career as designer at the Henry Street Neighborhood Playhouse, by volunteering to make the sets, the props, and the costumes. With "no budget"- Bernstein learned to make it work. Under Bernstein, the Playhouse was the first theatre to design and make their scenery, props, and costumes. The Playhouse was also known as a woman's theatre, "No man has anything whatsoever to do with it except by invitation." Critic John Gassner said, "scene designer originated in this small invovative community theatre." Yes, that is Bernstein. Even after she started working professionally, she still designed for The Playhouse. Bernstein was the first woman "invited" to join the Local 829, The Brotherhood of paintes, decorator and paperhangers-of the American Federation of Labor. They saw no reason to allow women. Until Aline Bernstein explained it to them. The Mother of Theactrical Design. She won the TONY for the 1949 opera "Regina" at the age of 70. She designed plays by Lillian Hellman, Eugene O"Neill, Elmer Rice, James Thurber to name a few. At age 45 Bernstein met Thomas Wolfe, he was 25 and they fell madly in love. The affair consumed them. Somehow, Aline kept her marriage together. And Bernstein also went deaf and learned to read lips so she could continue to work. Aline's last designed in 1953, "The World of Sholom Aleichem". Aline Bernstein helped shape the designing arts in American Theatre.
Posted by beingwoman at 10:32 AM