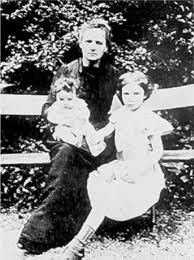 On this day in 1911, Marie Curie was awarded her second Nobel Prize in chemistry for her discovery of the two elements, polpnium and radium. Curie received her first Nobel Prize in Phsyics for her work in radiation in 1903. Only two people have been awarded two Nobels. And she was the first woman to receive the Prize. Even so, The French Academy of Science still refused to allow her entrance because Marie Curie was a woman. Irene Joliat Curie, her oldest daughter also was awarded the Nobel Prize in 1935 for the discovery of artificial radioactivity. The Curie family opened world to the science of radiation.
Posted by beingwoman at 10:46 AM