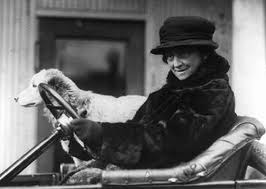 Born this day in 1870, Maud Younger. One of the flamboyant personalities of the Women's Suffrage Movement. Well educated and born wealthy, Younger used her life style to better the lives of other women and children. She worked at the "New York Settlement House" for five years. Younger worked to help unionize the waitresses of California. Which gave her the nick name "Millionaire Waitress". Younger was tapped by Alice Paul, president of the "National Women's Party"; with offices in Washington DC, Paul wanted to involve the wives of the politicians to help the cause of Women's Suffrage. And Younger's connections were very valuable. Also her talents in bridging the gap between the different groups of women. After, the 19th Amendment was voted into law in 1920; Younger continued work for union rights and human rights, and the Women's Party. Younger's last cause, "The Equal Rights Amendment".... As of today this amendment has not passed into law. ERA. Heard of it?