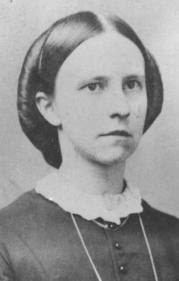 Born this day in 1835, Olympia Brown. Brown was the first woman to be a fully ordained minster. The journey was not an easy one. Educated at a time when even the colleges that were enrolling women still considered them of sub-intelligence to men. An example being, it was mandatory for the male students to memorize their speeches, whereas the female students did not because "they did not have the intelligence or ability." Brown memorized everything! And this was at Mount Holyoke Female Seminary! From Holyoke, she continued her studies at Antioch College; during this time Brown felt her calling was to be a minster. After many rejections-finally, Theological College of Saint Lawrence accepted her. Again, when it came time to ordinate Ms. Brown; she was turned down. Olympia did not give up and asked for equality and to be ordained and for her colleagues to listen to her sermons. They did. And on June 25 1863, Olympia Brown became a fully ordained minster. Brown also married and raised two children and worked as a full time minster. She was also very active in the suffrage movement. Brown was an example of where and who women were becoming in the future society of the 20th century. And let her example continue to inspire women in the 21st century.
Posted by beingwoman at 3:59 PM