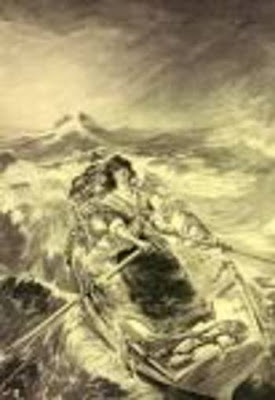 Born this day in 1842, Ida Lewis, lighthouse keeper, bravest woman in America(in her lifetime). Ida Lewis was most importantly known for her rescues! 18-36 folks saved at sea because of her bravery. Those men and a few women who would have been lost at sea if it had not been for Ida Lewis' brave actions. Without concern for her own life Lewis would dash for her boat- and with the strength of a strong man, off she went in moments she was there- very strong and very fast. Her most famous rescue was two soldiers whose boat capsized in a winter storm and Ida saw it- in moments not even stopping to put on shoes or a coat she was there and saved their lives. They awarded her with 218 dollars collected at Fort Adams. Her life began on Lime Rock because her father was hired as lighthouse keeper when Ida was 12. It turned into her life's work when a stroke that left her father ill and then took his life. Ida and her mother acted as the Lighthouse Keeper. (at this time Ida was only 14 so officially it was her mother) but it became clear that is was Ida who was the Keeper of the Light. For 39 years, Lewis spent her life in service- her fame spread throughout the country. Lewis received many accolades in her lifetime including the Gold Life Saving Medal. And Lime Rock Island name changed to Ida Lewis Island. Songs were written and hats and scarves created about Ida Lewis.

Harper's Weekly, written after Ida had made several daring rescues, debated whether it was "feminine" for women to row boats, but concluded that none but a "donkey" would consider it "unfeminine" to save lives oh the Victorians!
Posted by beingwoman at 5:08 PM