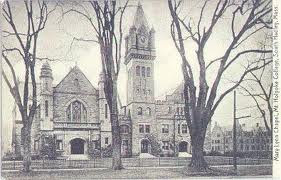 Born this day in 1797, Mary Lyon, visionary of higher education for women. Lyon's came from humble beginnings, a family farm in Buckland, Massachusetts, her father died and her mother re-marrying leaving Lyon's "to keep house" for her older brother-she was only 14. He paid her one dollar a week which she saved for her education. First job after attending the seminary was teaching in a one room school. But, Lyon's found her way to Byfield Seminary befriending Rev. Joseph Emerson (brother of Ralph Waldo Emerson) Rev. Emerson gave this lecture which changed Lyon's life.
'Discourse on Female Education' (1822) advocated that women should be trained to be teachers rather than "to please the other sex."
The journey began, first opening Wheaton Female Seminary(now Wheaton College) and then within two years Lyon raised over 12,000 dollars and in 1837 opened Mount Holyoke Female Seminary(known today as Mount Holyoke) both schools are in Massachusetts. Lyon served as the first president of Mt Holyoke,the first twelve years. It is also important to point out that Mary Lyon remembered where she came from and made education affordable and open to all women. To keep costs down Lyon introduced the work/study program which is used in colleges today. And her vision of women in the future was one of what we see today and so below is an example of course studies at Mt Holyoke during Lyon's time.

seven courses in the sciences and mathematics for graduation, a requirement unheard of at other female seminaries. She introduced women to "a new and unusual way" to learn science—laboratory experiments which they performed themselves. She organized field trips on which students collected rocks, plants, and specimens for lab work, and inspected geological formations and recently discovered dinosaur tracks www.mtholyoke.edu/marylyon/science.html
Posted by beingwoman at 9:18 AM